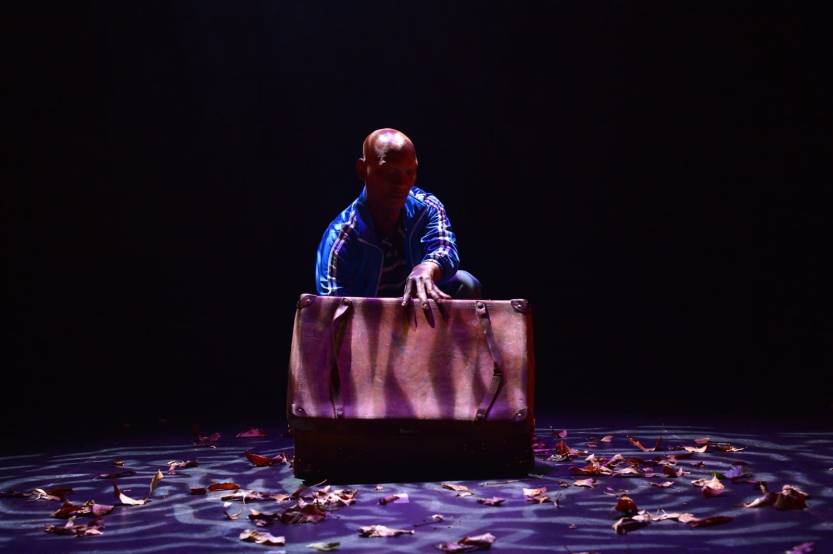 It’s been eight years since I have been back to watch a play there. The last time was in 2012. I watched “The Line,”  a play by South African born actress and director Gina Shmuckler. The Line was set against the backdrop of the xenophobic attacks of May 2008 in which Shmukler explored the fragility of goodness and engaged with the victims and perpetrators of that violence.

Similarly, “Nine-Lives”(2014) follows the life of Ishmael who flees prosecution from his home country Zimbabwe because of his homosexuality and arrives in England where fresh waves of xenophobia threaten his life.

Warren Masemola of Scandal, Intersexions, Vaya, and Tjovitjo fame among many others does a brilliant job of bringing all the characters which Ishmael meets on his quest to find a place he can call home again, to life.

I watched one of the pre-shows with a friend and colleague from out-of-town. She was eager to see the play with me out of nostalgia for a time when she came to see a play at the Market Theatre when Johannesburg’s Newtown precinct was at its most vibrant.

While waiting outside the Barney Simon theatre lobby my friend and I gazed through the large glass window. I showed her where the Gramadoelas restaurant used to be; where patrons could enjoy a continental array of meals in an eclectic atmosphere full of African art collected from all over the world. I pointed out to her all the spots I used to frequent; the coffee shop, Kippies Jazz Club, the spot where we used to go and watch independent films every other Thursday, the art gallery and the shops selling arts and crafts. Even Niki’s across the road was closed. It was impossible not to reflect on how the city I loved and enjoyed so much could shrink to a monochromatic vacant and fearful space.

Once inside the theatre my friend and I could not sit next to each other initially due to Covid-19 safety regulations. We did not come from the same house. There were a dozen other people who came out to watch the show on a Tuesday evening. Life has changed in downtown Johannesburg. Life has changed globally and there’s no way for any of us to put this gene back in the bottle.

After the play commenced I was immediately drawn-in by the set design, the lighting, the music. I was also intrigued by how Masemola used the stage; marching to specific points on the floor space to  locate and bring out identifiers for each character Ishmael meets in England.

My friend commented afterwards that she was sceptical about his performance. She wondered whether a small and delicate man like Masemola could manage to fill the stage. But he had exceeded her expectations.

As we watched on my thoughts drifted to my own play, Lindiwe! (2012) which was inspired by my love of theatre and radio dramas. Like “The Line” and “Nine Lives” it also touched on themes around exile, xenophobia, media freedom, political and economic unrest on the continent. I thought about everything that had taken place before and after I put the play out there for my world to see.

As I continued to watch Ishmael pace up and down the room like an animal caged in a state of statelessness; I realised something miraculous.

I was at ease and at peace. I was no longer aching, catching feelings over my “Jozi Days” gone by. The dreams I used to hold near or dear,  the places I used to frequent, the person(s) I used to be in these streets, the friends I used to embrace and the company I kept; all of it is gone.  It is now part of history just like the black and white images of all the creatives from yesteryear who once graced the stage which my friend and I glanced over as we walked out of the theatre to catch an Uber.

In 2012, when I took a leap of faith and went on stage at the Afrikan Freedom Station, it was my time. My moment to  finally put down the heavy suitcase I’d been carrying  and unpack its contents. Some of it was very sad, some of it  was funny, violent, angry, some brilliance was there too, there was some shame, betrayals, analysis, pride, fiction, truth and lies. So some of it was precise, concise, confused, crazy, vibrant and interesting. Some of it needed to go out in beautiful colourful flames.

Writing, directing and performing my own play was the first time I was able to fully grasp and discover the true source of all creativity; let alone the critical role of the creative industry in all our lives.  It was the first time I was fully able to appreciate the level of preparation, discipline, skill, talent, commitment, openness, passion and love required to produce a sterling, timeless piece of art.

I knew then without the shadow of doubt that art helps us to unravel the knots in our hearts, souls and minds. To make sense of the past, to understand the present. It allows us to see and be seen. To hear and be heard. To move and be moved. To feel, to cry, to laugh, to open up to life again. To trust the process. To know that we’re not alone. To develop compassion for ourselves and others.

This vibrant, colourful and youthful part of my life in Johannesburg has served me well and it still continues to serve me well today through the lessons I’m learning on the way here.

They say change is the only constant and I have never felt it as keenly as I did while I watched Nine-Lives. The circle is complete.

The Covid-19 Pandemic may have changed the creative industry in South Africa forever, but the art scene in Johannesburg was already beginning to show signs of decay years before the pandemic reached our shores.

Many creatives are beginning to fear that some of the industry’s curtains and lights could shut down permanently if nothing is done to support over a million cultural and creative workers in the country who have been left destitute by Covid-19 lockdown measures, let alone government corruption and fraud.

It’s a frightful scenario to contemplate. Yet, instead of fear, I felt a huge sense of gratitude to all the creatives – every single one of them who poured themselves out into my life through inspired words, music, movement and images. The arts anchored me during some of the most demanding and turbulent years of my young life.

You are with me wherever I go and together we will continue to create; shedding light in the shadows and potholes on this winding road called life. We will continue to provide a welcoming place for lost souls who have strayed too far away from home.  To Jozi, Johannesburg, Maboneng, my very own city of black Gold. You will always remain beautiful in my eyes ngoba I am because you are.   #Iam4theArts.