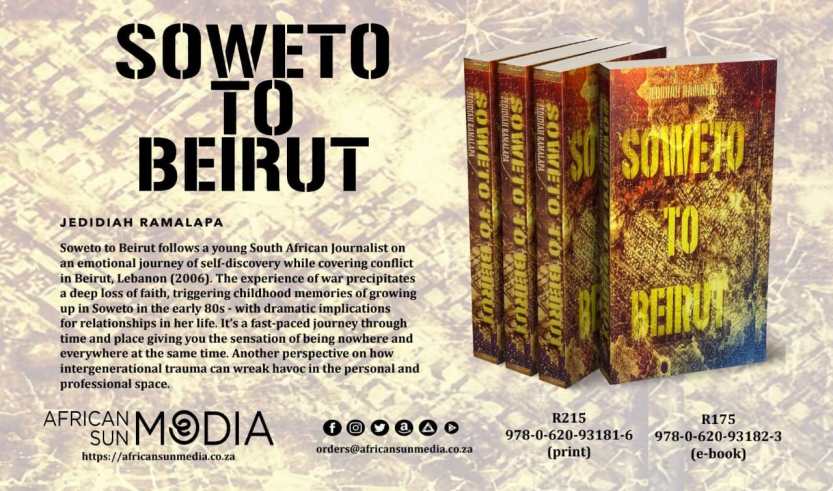 Last month a good friend Khulile Nxumalo asked me a few questions about my recently published book, Soweto To Beirut which is now available for purchase online. I hope it peaks your interest.

So do you make a distinction between AutoBio and Memoir?

Yes. I choose to call  my book  a memoir not an autobiography because  it is an account of trauma, a specific experience of trauma during a particular  historical period in South Africa. We are the children who matured with the  democratic age and there is a specific historical significance of that period in South African history. An “in between” moment in history if you will. We are a generation of freestylers.  Even if the story is about my life or my journey from Soweto to Beirut, I wrote the book because I wanted to bring forth the issue of Post-Traumatic Stress Disorder (PTSD) amongst black African journalists specifically. And the fact that at the time of my starting to write this book it was an unattended challenge in South African newsrooms, and probably still is more so today because of Covid. Even though mental health has become a hot topic, the new millennial buzzword – and an issue that many more people are aware of today, it wasn’t necessarily the case when I started writing in 2011.

I was also  writing this book in conversation with other books which eloquently describe the white experience with Apartheid, trauma and the transition period such as the Bang Bang Club, Country of My Skull, even the more recent SABC8 a book published by Foeta Krige, from a black woman journalist perspective.  My initial intentions were to produce an anthology of stories from black African journalists who reported during that period until now. Since I was not able to include all the voices that I wanted  in the end – I used my own life as an example of the possible effects of trauma. In this way it’s less about me and more about us and how we are living together and  managing the trauma of Apartheid in our personal and professional lives. As a black nation we need to talk about how we can heal from this and not repeat the same mistakes of avoiding integration. Perhaps more books will be written as a result of this, perhaps not. But it’s done. Memoir/autobiography? The reader will decide.

The genre or type of book under such catagory is always associated with age? What do you say?

I am a vintage soul and I  am also not as young as people think.

I have heard and participated in discussions that do not respect books like BARE, elitist and haughty attitudes to what other people think is Writing. Do you have any opinion?

I have not read any of Jackie Phamotse’ books yet. However, I am a supporter of diversity; of voices, experiences, stories and writing styles. In many ways the “vanity” publishing industry which has been buoyed and accelerated by the internet is a direct response; an answer to the rigidity of elite publishing establishments who, rightly, want to preserve some literary traditions. These gatekeepers have until now held the only keys to literary success or acclaim. Today though, everyone who wants to, can write a book or have it written for them more easily than it was previously possible for the general public. This has also resulted in an even greater desire by different actors including governments  to control the pandemic flow of information: what people can see, hear or engage with at any given time on the internet and on social media platforms we’ve all become dependent on has become the new frontier in the world of publishing.

At times this flood of activity creates the illusion that everything is possible now that the floodgates have been opened – everyone should benefit. In truth,  successful or well known self-published authors like Jackie Phamotse are a dime a dozen.  While the world of words and publishing is open to everyone; time, money and access to information remain persistent barriers, even for the new black-owned publishing houses which have sprung up in the past two decades. Legacy media does still hold keys to some doors but not all of them. The wonderful thing today is that we have options and multiple platforms and mediums with which to tell whatever story we feel needs to be told. That’s a beautiful thing. Whether people stop to listen, read or watch is another game altogether. Attention is the new currency. How do I get yours? That’s the billion dollar question everyone is trying to either answer or manipulate.

Your tech era or what you relate in the book is the time of cassette decks, older tech for reporting from the field. It makes for a texture of the story. Does technology, culture of reading worry you?

By the time I was working as a radio journalist in 2001 cassette tapes were already ancient; cd’s and minidiscs were on their way out. I feel as though I have had to learn to adapt very quickly to change whether it’s in a professional or personal space. Memory sticks and cards are still here but more tech companies are investing in the cloud as the new real estate. Eventually we will have to all go live on the moon so we can  leave enough room on planet earth to store all this information in ever expanding data farms.  Still I don’t worry too much about it. People can adapt. People read everyday – the question is if they are interested in what you have written. Technology does impact attention spans so future literary giants will probably come from nano-twitter streams. Maybe in the future going offline will be a real luxury, so in that vein actual books could become fashionable “collectors’ ‘ items. Who knows? There’s already so much to worry about today.

I am realising that beauty queens are not as facile as entertainment coverage makes them out to be, it takes a lot of preparation… can you let us in on the tricks of the trade?

No I mean, does it take being a person that feels like the camera is on all the time? If one imagines Ms SA, Miss This or That, I always see the full glare of the lights….

The lights are not always on you and also as you will see in my book; I did not cope very well under the spotlight. I have never tried to compete in another pageant again since. So honestly  I would not know what kind of person it would take to do that, but having all those qualities to start with, is a must.

Of course there is the phenomenon of influencers…

Yes, there’s more room for anyone who wants it, to be under their own spotlight.  But I don’t know enough about the culture to comment further.

As a journalist, you have always done hard news?

Is war reporting the most hard assignment in the trade?

From my experience I think natural disasters are hardest because there’s honestly no one to blame there, no side(s) to choose, no one makes a choice, it’s not premeditated/calculated even if they can sometimes be predicted.  Sickness and disease, poverty and hate crimes of all kinds are also very hard to report on. Suicides, femicides, murders, domestic violence, ritual murders, gang fights, taxi violence they are hard to report and happen more frequently in our societies than outright war. Rape, hunger, starvation. A lack of clean toilets in public schools for primary school going children is the hardest story to report on ‘cause it means that the parents and the teachers just don’t care.  Because why can’t they make sure the toilets are clean? The fact that girl children skip school because they are menstruating is devastating because what are the girls supposed to do? Why can’t sanitary pads, like condoms, be made available for free for school going children? Collectively we worship money, and status way too much for our own good.

The book has intimate psychological and emotional processes. Would you say the haunt recedes/ disappears?

This would seem counterintuitive however I think that what you pay attention to grows whether it’s good or bad unless you change your mind about it or more specifically the meaning you assign to that incident. When I was writing the book I was forced to open doors I preferred to keep closed over and over and again because I had to go through them to heal.  For example I can still see the image of my grandmother’s body in the mortuary sometimes, but it doesn’t affect me or change the way I feel. I don’t have the same reaction to the image as I have had previously, it has a different meaning for me now. But these days every time I catch myself resting my fist on one of my cheeks I think of my maternal grandmother who died two years ago. Her face was resting on her fist when she died, her eyes were looking straight at me but she was no longer there. I get a fright sometimes –  when I catch myself sitting that way but I console myself that she died peacefully. She looked so alive at the time of  her transition which is what shocked me most once the truth sank in. I was talking and making jokes with a dead person. They don’t disappear.

I was trying to put a finger on where I would say the healing starts to take shape. What stands out is the long walk with the musician, the nature of that exchange

I mean now that I look back at it, a lot of what happened seems slightly supernatural. As if  the creator had to make themselves real to me through someone like Ali and many others, who I judged harshly from my own past experiences and interaction with men and relationships in general in South Africa. He was a very kind, gentle and sweet human being. Having him walk next to me was a physical reassurance that I am not alone and it taught me a lot about myself and life in general. Healing is continuous. I don’t think there’s a start or end point to it,  you know?

I have asked you this before I know- are we in a war now?

It really depends on your definition of war

When you are a child, yes. But you soon learn.

Lastly, writing as a tool to get a handle on trauma, anything else you could share

I learnt a lot from Julia Cameron’s book The Artists’ Way. After writing compulsively just to avoid losing my mind for six months. I developed a daily practice of writing three pages of free – flow writing with no editing and without reading it back. You also have the choice to destroy those papers immediately so no one ever has to see them. Writing the morning pages in my mother tongue was hard and boring at first  because I kept writing about the same issue over and over again. I didn’t have to read it for a long time, and by the time I read them back, it helped to identify  dominant thought patterns in my life from an emotionally stronger position. Doing this everyday really helped me to manage some of my big emotions, especially since I could not trust anyone with the keys to my mind or heart at that time.  No one. It absolutely made a difference in my life. It taught me a lot of resilience, commitment and taught me not to take harsh criticism or people’s indifference to me or my work too personally. It helped me to finally become my own best friend, it brought me closer to umDali.